The Bookmill is a fun destination that's just far enough away, that I don't get to it very often. And right behind it, is a little restaurant, the Alvah Stone. Alisa likes it there because they always have interesting cocktails. And I've always liked it because they usually have good beer.

A friend recently had a retirement dinner there and we arrived to discover they'd changed the menu. Rather than serving "meals", they've changed to "small plates". They suggested each person should order two or three. It was a bewildering array of different kinds of things. I started to panic. But then someone pointed out that they have a "feast" option where you don't pick anything: they just bring stuff. It was priced a bit more than two plates, but not much more than three. So we all did that. And that was a great choice.

It was great because we didn't have to waste time deciding. We could just all pass in the menus and not worry about trying to pick stuff, or coordinate with other people to get different things. Or worry if we were ordering too much or too little. We could just socialize and have fun.

The first dish was their famous brown butter cornbread with (honey bacon butter!). Then marinated mushrooms and garlic toast. There was a caesar salad. And sesame noodles. And salt-roasted beets. And beans. And greens! Then tofu. And steak! And scallops! We could all try everything and discuss each thing as it came out. It was paced perfectly. The plates came steadily and everyone had plenty and to spare.

Oh, there was some nasty eggplant too. Boo. But there were so many good things that it didn't matter that one was nasty. And most of the dishes were excellent. The scallops were exquisite and the steak was superb.

Best of all, it meant that we all finished around the same time. I tend to unhinge my jaw and just inhale my food, while Alisa is very very slow, like a loris. When we were on the road together and ate every meal together, we converged a bit, where she speeded up a little and I slowed down some. But since we don't do that anymore we have reverted to our former ways. But having the small plates meant that we were all eating together the whole dinner.

My only disappointment was that they didn't have an IPA to drink. There was one on the draft list, but the keg had just kicked and they didn't have another IPA. They did have an APA by a good local brewery, but it was only OK. Alisa was pleased with both cocktails she got.

I was really skeptical about the whole "small plates" idea at first, but doing the "feast" was perfect and gave us a great experience. 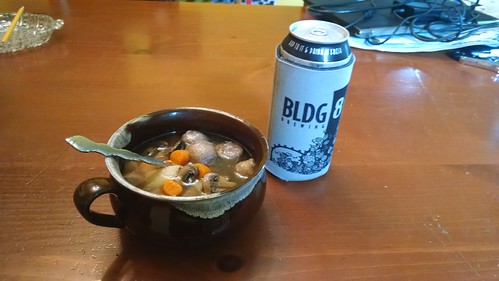 Today I made a pot of Brewer Stew. This is an invention of my own with two main influences. Several years ago, at the tomato festival, a guy made something he called wild man stew which I liked a lot. And Buzz Hoagland makes a rather different stew that's also excellent. Mine is a sort of synthesis of the two. My recipe is rather simple: fill a big pot about half full with water. Throw in two pounds of italian sausage (I use links that I cook for a while; then remove, cut into slices, and then throw back in), diced potatoes, carrots, and sliced mushrooms to basically fill the pot. Season with pepper, salt, two bay leaves, and rather a lot of red wine. This is why I call it "Brewer Stew" because if you're drinking beer, what else are you going to do with the wine?

After it simmers for a couple of hours, it's ready to eat. And so am I. 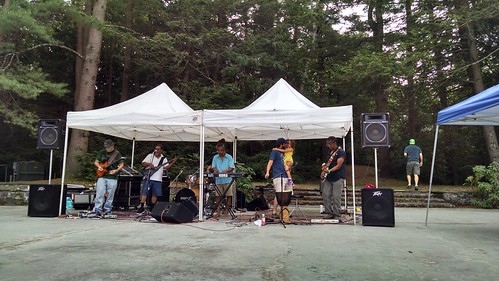