Not Creepy At All

This is a story that Phil and I have been trying to tell, but have been reluctant because it sounds kind of creepy. But my goal is to persuade you that it isn't creepy at all. Well, not very creepy anyway.

When Phil and I attended the Esperanto "Landa Kongreso" in St. Louis, Darcy Ross also attended. She brought with her a whole contingent of other students she had organized from the student Esperanto club at the University of Illinois. A bunch of us other (older) folks were hanging out in the hotel lobby when Darcy breezed in chattered with us for a few minutes in Esperanto and then breezed out. All the men sighed as she left and a grandmotherly Maria Murphy said, "Ŝi estas tre ĉarma, ĉu ne?" ("She's very charming, isn't she?") And all the men agreed, "Jes, jes. Tre ĉarma!"

Dr. Robert Read, one of the other esperantists, upon hearing that there was suddenly an Esperanto club in Champaign with 14 or 15 such active learners, wanted very much to meet with them -- to see whether there was some factor or technique that could be replicated to initiate an Esperanto revolution all across the country. So we all had lunch together. 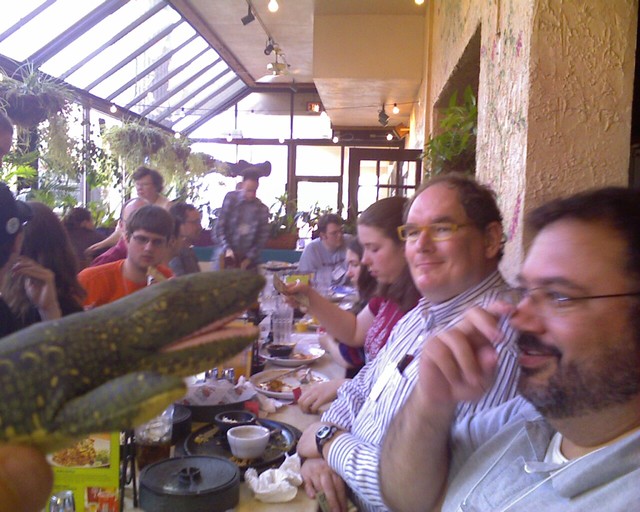 After lunch, I asked Dr. Read what he had learned. He thought for a moment and said (in the penetrating way he does), "Well, I understand it now. To produce this kind of fantastic change in any community, all you need is Darcy." And we mused for a few minutes about how it was just too bad you couldn't clone people.

And for a day or two, Phil and I were wistful about how every club couldn't have their own Darcy. And at some point one of us had the insight that, not only Esperanto clubs could use a Darcy: that EVERYONE needed a Darcy. A Darcy of their very own.

So for 10 years, Phil and I have quietly mused about the idea of everyone having a Darcy of their very own. See? It's not creepy. Not creepy at all.

And what would you do with your very own Darcy? Whatever she tells you to.