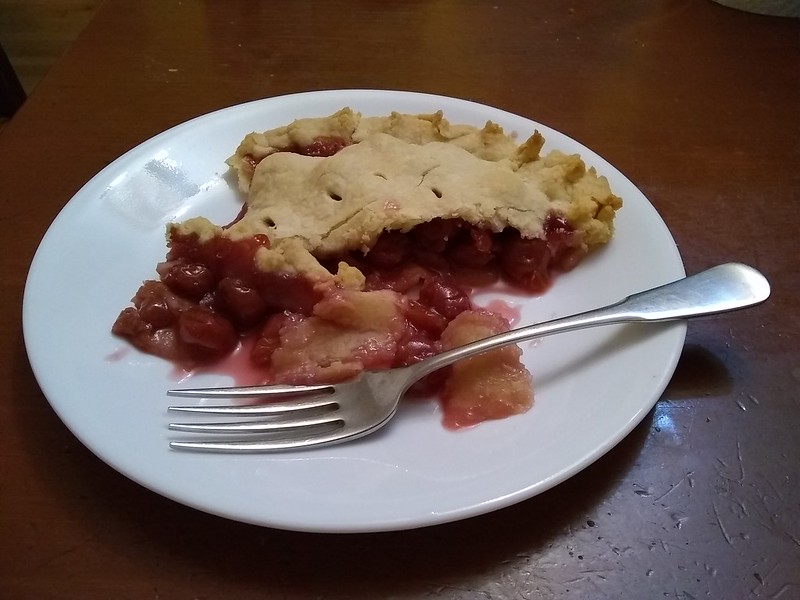 Growing up, my mom frequently made delicious pies for dessert. She was a stay-at-home mom who always fixed a traditional family dinner at night. To please my father, these meals needed to include a fresh, home-made dessert. Cakes, cookies, and one time even Baked Alaska (in response to a challenge). But pies were her speciality.

The crust requires mixing a whole stick of butter into flour with a fork, rolling it out into pie crust, adding the fruit filling in the pie tin, then pinching around the edges to seal the filling. Then baking, of course, till it's golden brown.

A couple of years ago, I had asked mom if she'd make a pie but she said she was done making pies for people. She'd made them the whole time she was married. But now she was retired. It was too much work. No. No pies. She related the same when we were visiting her sister last week.

Of course, then I had to tell the story that, when Philip was visiting, I came home to find him eating an apple pie that she'd made for him. He asked for a pie and she ran around to get everything and make it for him. I teased her, just a little, that she'd make a pie for him, but not for me. So she promised to make me a pie too.

At the store today, she got the ingredients to make two pies. She related that a neighbor had been talking to her about pie and she had told him she couldn't make them during the summer because it was too hot. But since it was winter now she could make a pie for him too. And she did. I helped her look up his phone number too. (She had said, "Do you think he's in the phonebook?") It turns out it's almost his birthday and he sounded very excited and touched: he said he would be waiting at the front door to receive a pie fresh out of the oven.

And I got my piece of pie too. Delicious. Just like I remember from my childhood.