With all my "free time" this summer, I decided to write and shop around a proposal for a Makers at Amherst Media project to refresh the infrastructure of the Poem Windows in Amherst. I've been working with Rene Theberge and the the Amherst Public Art Commission to craft a plan and find the necessary funding. 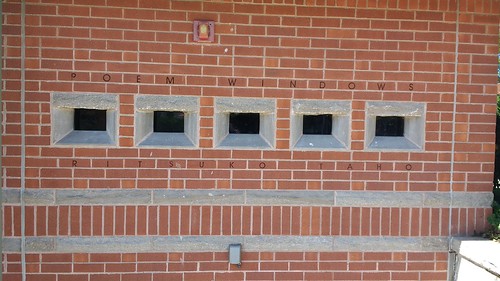 Created in 2002 by a Japanese artist, the project was abandoned after the original technology failed. Evidently, it never worked particularly well, especially in cold weather and, after a few years, quit altogether. But it was an idea that resonated with me. 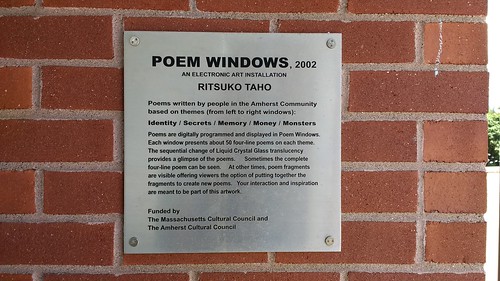 A few years later, Amherst Coming Together tried a second attempt that used iPads, but it was not a good technology decision and mostly seemed to display error messages about installing updates. 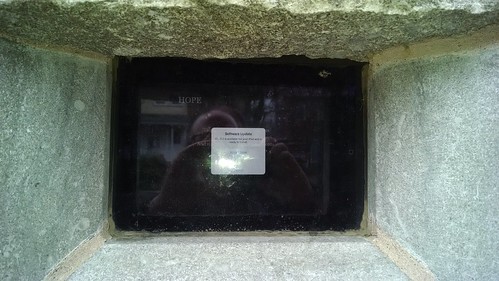 I propose to replace the equipment using inexpensive Raspberry Pi computers and small displays that simply show a URL in a full-screen browser window. This is all the system actually does: When the computer starts, it consults a file on the network that determines which URL to show: the page displayed at the URL is responsible for showing the necessary content. The browser also uses a plugin that will retry periodically in case there is a transient problem with network connectivity. In addition, the system checks the operating system for integrity and pushes updates out to the computer every morning, which is important for security. This design is based on the system for providing Inexpensive Digital Signage that I developed for the College of Natural Science at UMass. We support around a dozen signs and also use a variant of the same system (combined with a script mostly developed by BMB) to monitor -80 freezers. It should work fine in this context.

I also had an idea that might provide some level of on-going support for the poem windows installation: invite organizations, businesses, and individuals to purchase their own "poem window" the price of which could be set sufficiently high to subsidize the permanent installation. It would basically use the same components, plus a low-cost acrylic frame, to enable it to sit on a counter or table. If there were more poem windows where people could see them, it could also increase the incentive for people to contribute poetry and images for the displays. It could also help keep the Makers busy, if they agreed to take up the support effort.

The proposal does not address how to collect and present the content for the new displays. That will need to be a separate effort that will technically require a website with a page to accept submissions and a presentation page that, when run full-screen, will be the display that is viewed by the poetry windows. But it will also require a committee of people to establish criteria for submissions, run a campaign to solicit submissions, and a process for judging submissions and approving some for display. I hope to also have time to contribute to and help shape that effort. But one step at a time.