In early June, Lucy, Daniel and I headed west to visit Phil in Champaign. From experience, we know that we can usually get across New York and Pennsylvania in one full day of driving, and we often aim for Kent to spend the night. The first time, I was interested in visiting the memorial at Kent State and, the next time through, with both boys, we went early in the morning to visit the spot and reflect before pushing through. 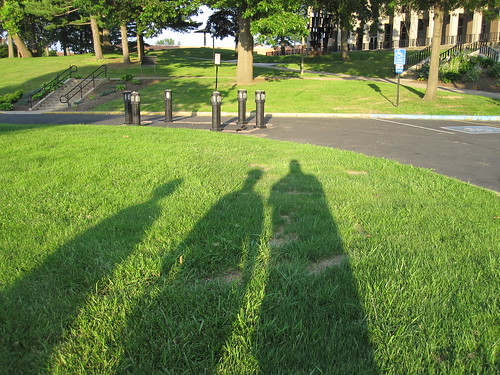 This year, we had gotten a good start and we arrived a bit earlier than usual. Once we were checked in, we explored toward Kent to look for dinner. I noticed a place, called Mike's Place that seemed totally packed. That's usually a good vote of confidence, but it seemed so full we might have trouble finding a place to park or getting a table. But after exploring and rejecting the other options (like Bob Evans) we pulled in to check it out. Then we noticed the X-Wing fighter parked in front and it seemed like an even better choice. 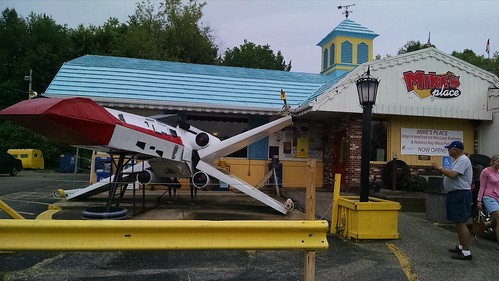 Once inside, we got a table much more quickly than I had expected and then were confronted with the menu. It appears that, served with every one of the hundreds of possible entrees, you also get a side-dish of attitude for free. Toward the end, you can find "Rules of Dining at Mike's Place" that include nuggets of wisdom like "Only Mike or Managers may refer to waitress staff as Serving Wenches. (They call us managers Studpuppets! Honest!)". It was a charming place with an incredibly diverse range of dining options. I got the I AM SO CONFUSED, BUT I LIKE IT! for $6.29.

They had an IPA by Deschutes I was interested in trying, but when I got it, it was terrible -- it was kind of malty and plain. I then tried the Yuengling IPL which was better. When I got the receipt, I discovered they'd served me a Dos Equis instead of the IPA. Oh, well. Nobody's perfect. I don't always drink beer, but when I do, I don't get Dos Equis because that stuff is nasty.

All in all, it was a very satisfactory experience and one well worth repeating if we stay in Kent again.