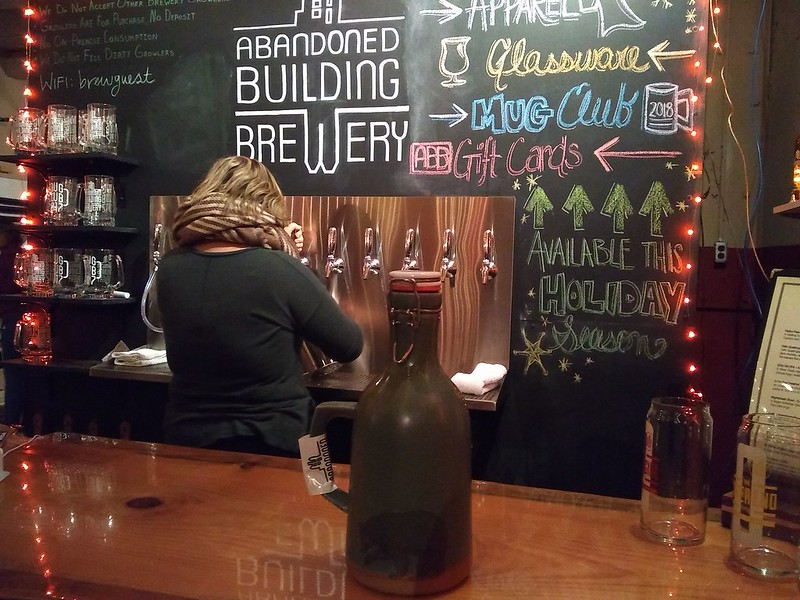 On Friday, I sent Tom a message via chat to see if he was around and a couple of minutes later he sent me an SMS message. It turned out these events were independent of one another, but we both had the same idea. Tom had gotten a new growler as a present for Christmas and I had gotten a new growler cleaning brush from Phil and so we both had growlers on the mind. We consulted our schedules and agreed to visit a brewery on Saturday to get our growlers filled. And to take a road trip, sample beer, and have good conversation along the way.

I suggested we try Brick and Feather Brewery in Turner's Falls. I had gone there with Buzz about a year ago and, although we hadn't really liked the place, I wanted to give them a second chance. It just didn't seem like a welcoming place to me: they have the counter roped off, so you can only approach it to purchase things, and everything is transactional: no samples, no conversation, just buy something. When we arrived, it seemed the same. I approached the counter and expressed interest in getting a flight and then filling a growler, but the woman explained that they only fill amber glass growlers. "That's just our policy," she said. I replied, that being the case, I guessed we wouldn't be buying any then. We did sample their beer. They seem to have some quality control issues: their IPA, In Absentia wasn't as good as it sometimes is. I guess I don't need to go back there again. Oh, well. I tried.

I felt a bit defeated, but Tom suggested we go to Abandoned Building Brewery in Easthampton. It was a bit of a drive, but they seemed happy to see us and complimented me on the beautiful growler I had. She said the only requirement was that it had to show the volume (which both of ours did. In France, the beer glasses all have fill lines with the volume indicated too.) She took our growlers back and put them in the fridge to cool down while we sampled beer. Well, Tom sampled beer. I already knew I wanted The Other End which is a really outstanding Imperial IPA. Tom tried the Hydra and Dirty Girl, but ended up getting a growler of The Other End too.

Along the way, we had a lovely time: lovely winter scenery for the drive, pleasant conversation in the car, and fun games at the brewery with the kids. (They watched a movie in the car). Oh! And a growler full of delicious beer.