Counting my blessings and planarians

This morning was bitter cold. The temperature was below zero when we got up and, when I left for work, was still in the single digits. I took a bus to the stop closest to a door of the building. The wind even for that short distance was brutal. I was hurrying a bit, partly due to the cold, but also because I was almost late for a 10am call. Then I slipped on the ice a few feet from the door.

It wasn't a bad fall, all things considered. One foot slid out from under me and I landed heavily on a knee. I dropped the box I was carrying, but I didn't crush it — or my laptop that was in my bag. I breathed for a few moments to take stock of my situation. Then I sat for a few moments to consider how to get back up. I wasn't sure I could get my feet under me without something to push up against.

Eventually, I positioned both the box and the laptop so I could balance using them, just until I could get to my feet and I succeeded without obviously damaging either one. Now late for my call, I walked carefully to the door, and found it was locked. The only door I have a key for is way back on the back side of the building. But another door nearby is supposed to be always open, so I made for it first. Also locked.

So then, now risking frostbite out in the wind, I limped sadly around to the far side of the building and let myself in, blood staining my pantleg from the skinned knee.

But, tho late, I was able to take the call using my laptop, which still worked fine. And I opened the box with the aquarium (a replacement aquarium because the original was damaged in shipment) and it seemed fine too. I rinsed it out and set it up so my planarians will have someplace to stay while I'm gone. I put a couple in at first to make sure it's OK. But they just vanished into the gravel. Once I put the rest in, I'm not sure I'll ever see a planarian again: they may only come out at night. That's OK. 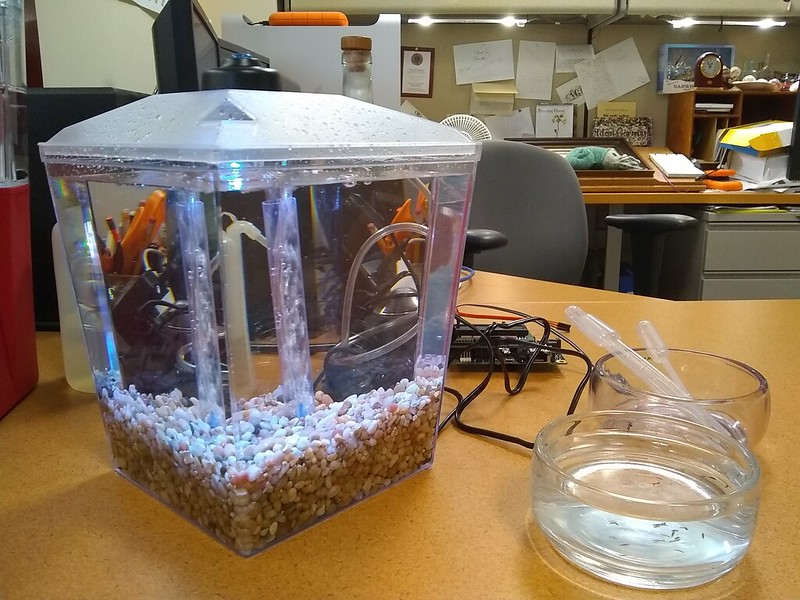 I'm very happy with the aquarium, though. It's pretty much this one. It's only one gallon, which is plenty for planarians, and has a simple under-gravel filter, which I think will be a good fit for them. It has a light that uses a couple of square LED pixels and can cycle through supposedly 7 different color combinations. It uses AA batteries, although it can use an adapter. And it turns out the adapters I got the Intel Galileos work fine and I have a surfeit of those because they sent me replacements because the first ones didn't meet FCC regulations (emitted too much RF or something I couldn't care less about).

Now, my knee aches. But it could have been so much worse…