In recent years, I've had to chose whether to attend graduation or MTA Annual Meeting. This year, however, they were scheduled on different weekends and it was a pleasure to be able to do both.

I'd gotten disgusted with the MTA leadership and then was so amazed and pleased when Barbara Madeloni was elected president. She's struggled because many in the leadership failed to give her their support, but in spite of that I think she's done an excellent job. She's really changed the dialog about education and unions in the state. It's been an incredible turnaround. But Barbara was up for re-election and she had two opponents: the guy she beat last time and the current vice-president.

The turn out to the meeting was huge -- so large that, although we usually had tables, they had to set up stadium seating to fit in enough chairs. 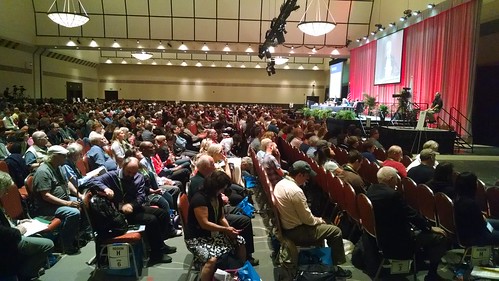 I wasn't sure what was going to happen, but I was encouraged when I went to the Educators for a Democratic Union caucus meeting and found that one in three participants was a first-timer. It was incredible to see how many new members had come to make a difference!

Once again, the public schools are facing an existential threat. The monied interests want to privatize the schools and have put a measure on the ballot that would allow them to open a dozen new charter schools every year. That means they could wipe out the public schools in two or three towns every year. Reports are that they've raised $18 million to devote to passing the measure.

The MTA and AFT are working together to defeat it in a coalition called Save Our Public Schools. The main piece of business at Annual Meeting was to approve our contribution toward the funding. It was going to require some tough choices. As we debated the issues, the election was going on.

My main frustration is that almost every election cycle, we have to face another threat from enemies with deep pockets that play mischief with the law. Our legislators tell us they hate ballot measures and so we haven't run any. But yet we end up having to defend ourselves and it's bleeding us dry. One year, it was to defeat a ballot measure that would have eliminated the income tax. Another year, it was to allow administrators to fire teachers more-or-less arbitrarily.

I think we should go on the offense. I think we should launch our own ballot measures and require them to fight us. The first one I'd do is to require charter school teachers to be in the same collective bargaining unit as the local public schools. But we have enough MTA members that if JUST OUR MEMBERS signed on, we could put measures on the ballot. We could do five or ten or a dozen. Maybe that would get someone's attention.

In the end, Barbara was handily reelected -- and allies won several of the races for Director and Executive Committee seats. Unfortunately, Barbara's enemies combined forces to defeat the vice-presidential candidate that was running with her, which I thought was really unfortunate because I had been, by far and away, more impressed with her ideas and vision than any of the others.

I also noticed that the reactionary forces in the union are weakening. When their spokespersons would come to the mic, you could almost predict that the body would vote against them. The MTA is odd: very strongly progressive related to unionism and public education, but extremely divided with respect to many other conservative causes. But the infusion of new blood means that the times they are a'changing.